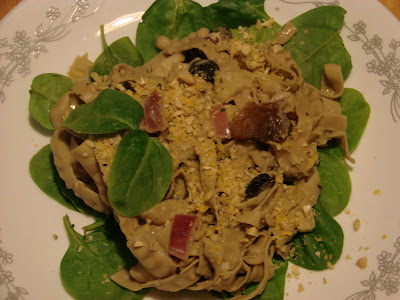 Strange title, I realize that.  Last night we were listening to Type O Negative.  And while we were gazing at the very greenness that we were about to munch on, Adam realized that the song Creepy Green Light was playing and I couldn't resist ;)

We tried out mung bean noodles for this dish.  These fellas have a definite beany taste and hearty texture, both of which we enjoyed.  And, like Soba noodles, are a quick fix, taking no more than 6-8 minutes.

For the sauce we were inspired by the Roasted Garlic Artichoke Spread from Eat, Drink and Be Vegan.  For 45-50 min. you roast a mixture of garlic, artichokes, oregano, oil and lemon juice.  I mashed some white beans and mixed them with soy milk and black pepper while heating over medium low heat.  Next I added the garlic artichoke mixture, red onion, chopped olives, and marinated shiitake mushrooms.

All in all, not bad.  In the future I would like to add more herbs and garlic.  I would also recommend frying the onions and mushrooms ahead of time (which we did not do) to really bring out the flavors.

looks great! i like how you added spinach leaves under the noodles...really pretty