Back to the food, finally!  You may have noticed that we're not too worried about sticking with one culture at a time.  To me, it's kind of exciting to mix dishes from different cultures and see how they can compliment one another.

It seems that Colombian food is a good choice for mixing cultures, since the food is already a mixture of tastes (see Colombian Cuisine).  Like in many parts of the world, the food will also depend on the region of Colombia.  Sad for veggies on vacation: "Colombia is not a paradise for vegetarians as the Colombian diet includes a lot of meat." (see South America: Colombian Food) And how about this quote from a description of Fritanga (a heaping pile of meat): "Guaranteed to sate any carnivore and send any vegan into therapy..." (see Traditional Colombian Food).  But for those of us making our own food here at home, no problem!  Just a few tweaks here and there.  On the South America: Colombian Food page you can find a wonderful list for common dishes served in Colombia.   For the vegan side of things they have huge quantities of tropical fruit and coffee, of course!

Since China is quite big, here's a bit about Shanghai:  Shanghai's cuisine is mostly a combination of the surrounding areas, being a relatively new city (see Shanghai Cuisine).  Sugar is a very common ingredient, especially in combination with soy sauce, and more is used in Shanghai dishes than in any other city in China.  Speaking of soy sauce, Shanghai chefs are known for their use of heavy and highly flavored sauces (see Shanghai Food).  Alcohol is also commonly used, like in "drunken" meat dishes.  On a vegan note, smelly tofu is a popular local treat in the street. 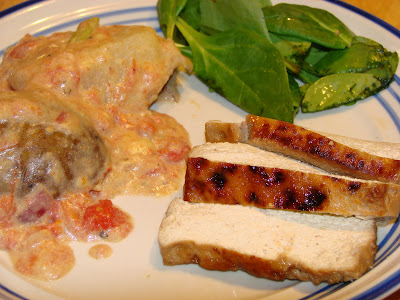 In a skillet, over medium heat, melt the margarine.  Add and fry onions (green and red) and tomatoes.  Stir frequently and cook for about 5 minutes.  Lower heat and add everthing except for the "cheese" sauce and potatoes.  Cover, while cooking over low heat, stirring often.  Meanwhile, fix your "cheese" sauce.
After 5-10 minutes, add the "cheese" and heat everything together for about 5 minutes or so.  Pour sauce over potatoes and serve.

Bring everything, minus tofu, to a boil.  Add tofu, cover and simmer over low heat for 1 or 2 hours.  Be sure to turn the tofu periodically to help it absorb flavor more evenly.  Remove cover, increase heat and cook 15-20 min., until only about 1 cup of liquid remains.  Slice and serve.

Both of these dishes were extremely tasty and will be served again!  Adam suggested cutting the tofu up ahead of time to absorb more flavors.  The taste was very much like a ham baste and the tofu was juicy!  The potato dish was saucy, creamy and wonderful!

these look great! love potatoes--this is on my list...i was a bit confused-thinking we were tripping to columbia (MO) but then realized it was colombia (the country); )

Oh man, that's what I get for living there! Thanks for noticing, I'll fix it ;)

We're big tofu lovers here and I like the look of that Shanghai tofu! Thanks for the recipe!

I love this! I love your mix and match of different regional cuisines! Both the Colombian potatoes and the Chinese tofu are mouth-watering. You should open a fusion cuisine restaurant! :)

Reading in the Dark said...