About Algerian Food:  Many other cultures have influenced Algerian's cuisine.   A great description from Algeria.com (also check this link out for more Algerian recipes):
"The Berber influence on Algerian cuisine is clearly seen in their use of stews, lamb, vegetables, grains and dried fruits. The Turks and Arabs have added spice to the mix as well as a variety of delicious pastries. French cuisine has contributed greatly to Algerian dishes with the use of tomato puree as well as in their aperitifs and sweets. You will be able to taste the distinct flavors of cumin, caraway, marjoram, coriander and fennel in Algerian cuisine. Typically, lamb and chicken are used in meals as well as fish from the Mediterranean. Algeria's national dish is Couscous, which is steamed and then served with meat, vegetables and sauce.
Coffee is popular in Algeria, but is served extremely strong along with a glass of water. However, the preferred drink in Algeria is tea with a hint of fresh mint. Fruit drinks are also commonly enjoyed."

According to Whats4Eats Algerian meals are often finished off with dates or fresh fruit.

Beginning my venture through Extending the Table, I chose to veganize the Chicken Stew for Couscous.  We were out of couscous, so I actually used rice for this dish. 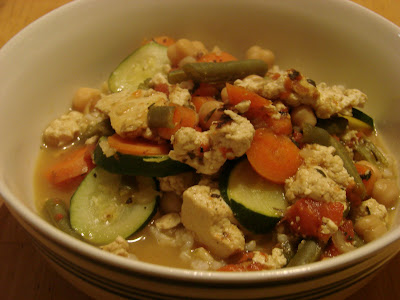 Chick'n Stew for Couscous (or rice)

After that has cooked for a bit, add:
2 c. cooked chickpeas (or 1 can, drained)
1/2 t. red pepper flakes
Cover and heat through.  Serve over couscous (rice, other, or even on it's own).

I did not measure the rest of the ingredients exactly, so it's up to you.  Also, I used what was left of the marinade for part of the broth in the soup (I think I had about a 1/2 c.).

Feel free to share any sites that you have discovered in your World foods search ;)

Here's a funny thought:  I'm working with recipes from around the world, while taking a stronger interest in local foods and activities.
Posted by Cassie - Vegan Fox at 9:21 PM

Looking tasty :) I really like how you are including all of the links to explore other related sites, im learning so much!

Glad to hear it! I will continue to add them :)

i love north african food! especially the arabic-influenced bits! thanks for posting this, fox.

Oh wow, I seriously love the sound of this. The chicken-style tofu is especially intriguing!

Reading in the Dark said...

That looks so good!

Thank you for a very informative post! I love all the stewy action you have going on here! May I come over for dinner? :-D