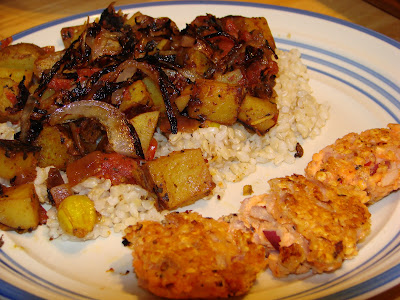 Staples in Bangladesh include rice and lentils (dal or daal), especially red lentils (according to Bangladeshi Recipes).  Bangladeshi Recipes, also, states that these are commonly used:  mung beans, ripe coconut, mustard oil and paste.  Fish are a major source of protein.  From Wikipedia: "As a large percentage of the land (over 80% on some occasions) can be under water, either intentionally because of farming practices or due to severe climatological, topographical or geographical conditions, not surprisingly fish features as the major source of protein in the Bangladeshi diet. There is also a saying which goes, "Mach-e-Bhat-e-Bangali" (Fish and rice make a Bengali)."  Beef is also very common.  You might find this 'common to region' information interesting (also from Wikipedia):
South - sea fish and coconut milk
Dhaka - fried rice and lot of meat (biriani)
West and NW - Vegetable curries, heavily spiced food and river fish
NE - lake fish, fruit, and pickles
Most important spices: ginger, garlic, coriander, cumin, turmeric and chili.
For sweet dishes: cardomom and cinnamon.

This meal:  I really enjoyed the Potato Curry.  The book recommends serving crisp, brown onions on top, which was a fantastic suggestion!  I would not recommend serving it on rice, however.  It was too dry for that.  I think, like the book recommends, that it would be a good idea to serve it with a juicier dish (which you could serve on rice if you wanted).  I wasn't a huge fan of the Onion Lentil snack, but I haven't really developed a taste for lentils.  Perhaps I will work to develop a lentil treat I like ;)

Fry the thinly sliced onion in oil until brown and crisp, then set aside.  Fry onion and garlic until soft (about 3 min.).  Add tomatoes and spices and fry until tomatoes are soft (3-5 min.).  Add everything else, cover loosely and simmer.  Be sure to stir ovvasionally and continue until sauce is thick and potatoes are tender.  Garnish with onions.

The potato curry looks good! Might have to try that this weekend!

What a yummy looking dish--I love a good curry!

bangladesh says grameen bank to me, as well as some yummy vegan food. if you don't know about grameen, read and celebrate the success of a good idea that puts heart WAY ahead of wallet..

Oh my! The crisp brown onions on top really look fantastic! My eyes were automatically glued to those onions as I was scrolling through google reader. Thank you for the recipe! :)

I love potato curry and this looks like a good recipe to try out. It's making me wish I'd made it for dinner instead of a tofu dish... Oh, well... As Scarlet O'Hara said, 'Tomorrow is another day!'

Thanks for all of the wonderful comments! I promise it was quite tasty, the onions were definitely a worthwhile addition :)

This means that you literally get rid of fat by eating coconut fats (including coconut milk, coconut cream and coconut oil).

These 3 studies from big medical magazines are sure to turn the traditional nutrition world upside down!