Ethiopia and Kenya (sort of)

This is my first E.A.T World entry.  I am super excited about this project!  For this entry I made two African dishes listed at The Fairest Feed.  For many subsequent entries I will be working my way through Extending the Table compiled by Joetta Handrich Schlabach.  I have hardly cracked this open, so I'm excited for this opportunity!  Not to mention there is a wonderful Index that lists recipes by country!  For the most part I want to go alphabetically (by country), but I was already planning to make these and excused it since the continent starts with an A (just this once).  From here on, however, my personal rules for this event will be A-Z.  I will allow myself to make something out of order ONLY if it is a letter I have passed.  Let the games begin!

Shiri Wat is an Ethiopian Pea Stew.  After looking at other Shiri Wat recipes, I think this may qualify more as an African Peanut Stew which seems to be popular in the West.  Here is a bit of info. I found on the Recipes Wiki, "In Ethiopia every family keeps a supply of powered, spiced, hot ground peas known as Mit'in Shiro. You can buy it at an Ethiopian grocery or make it from scratch...", hence the Shiro in the name.  On this blog it says, "Shiro is a flour made from ground legumes. It is not entirely clear what kind of legumes- I have heard chickpeas, fava beans, and split peas are all possible ingredients, although it seems like the menus at the Ethiopian restaurants we frequent say it’s made from chickpeas. Mit’in shiro is just like plain shiro except it already has spices added and thus has an orange color. Mit’in shiro (used to make shiro wat) is hot, but shiro alecha is mild."

Regardless, we made this dish and it was good.  We used cashew butter instead of peanut butter and cannellini beans because I forgot to soak the black-eyed peas we bought. It was wonderfully think and creamy :) 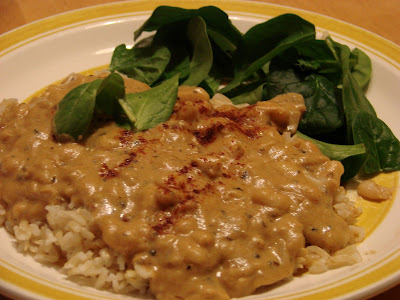 Maharagwe is a spicy bean stew from Kenya.  Most recipes I found chose Red beans, but according to this site maharagwe means 'beans' in Kiswahili.  Traditionally, it includes coconut milk and curry spices.  Once again we followed a recipe from The Fairest Seed.  Though we did have the black-eyed peas this time, I realized that I was all out of chili powder.  So I threw in paprika and cayenne pepper.  We were pleased with the results :)  (For some extra spice throw on some red pepper flakes!) 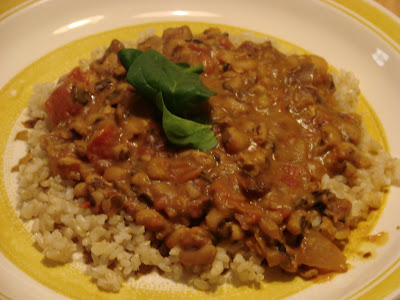 Be sure to check the above recipes out.  If you want to try out some African cooking yourself, you might be interested in these links:
The Congo Cookbook
Ethiopian Recipes
Maharagwe (another version)
West African Peanut Stew

Also, this seems like a good site for many around the world recipes: Whats4Eats.  I encourage everyone to try out some world cuisine soon and maybe jump on the train and take the E.A.T. World challenge yourself ;)

Thank you for this interesting blog entry! I'd really love to cook more food from different African countries.Those links are very helpful and your meals look very delicious!

Looks delicious and you did quite a nice job with your improvisations in the ingredients. I love the idea, too--Eat World! Love it!

Awesome first E.A.T World entry! Thank you for all the links, they will sure come in handy for my future entries.

Haha! Thanks, we've been very into stews lately. We just keep finding these great recipes.

The meaning of this is that you literally burn fat by eating Coconut Fats (including coconut milk, coconut cream and coconut oil).

These 3 researches from big medical journals are sure to turn the conventional nutrition world around!